Rachel was a full-time student and a serious athlete.  She had just been accepted into every nursing school to which she applied and she was very excited to pursue that education and eventually that career.  She had also just met and moved in with her boyfriend. 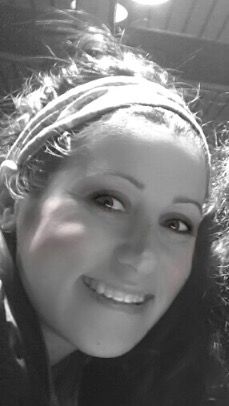 Then, Rachel found herself pregnant.  The day Rachel found out she was expecting she remembers: shaking, feeling sick, scared and numb all at once.  This was not an ideal time to get pregnant – she was still in school, she had no money and not a lot of family support. Plus, things were not going all that great with her boyfriend.

I asked Rachel a lot of questions about the day she found out she was pregnant.  One of them was, “who did you tell first”?

Rachel first told her brother.  Her brother responded, “what are you going to do”?  She then told her boyfriend.  He didn’t believe her.  Eventually, when he finally did believe that she was expecting, they told his parents.

His parents response was similar to her brothers, but a little more harsh.  Rachel did not get a congratulations, a smile or a hug.  Rachel got a question – the question was: “what are you going to do about it”?

Although the word abortion was not said, it was heavily implied. And abortion was weighing on Rachel’s mind.  I asked Rachel if she had a debate inside her mind about having an abortion vs. not having one.  She said yes.  I asked her to share some of those thoughts, and she did:

All of these feelings and thoughts were on her mind – and while she felt scared, Rachel said she also felt numb.

Then one day she was driving and saw a billboard.  It read, “Considering Abortion” and had a phone number.  Rachel made the call.

A woman named Liz answered and talked to Rachel.  When I asked Rachel what she remembered about the phone call, she responded: “Liz wouldn’t let me off the phone.  Her voice was caring and she said she wanted to meet with me as soon as possible.”

Rachel made an appointment to meet with Liz at one of A Baby’s Breath’s centers the very next day.  There, she heard her baby’s heart beat.

At that moment, Rachel experienced total clarity.  She thought:

For months Rachel continued to meet with Liz and visit A Baby’s Breath for counseling, guidance and support.

It was at A Baby’s Breath that she received the support and love that she had not received elsewhere. 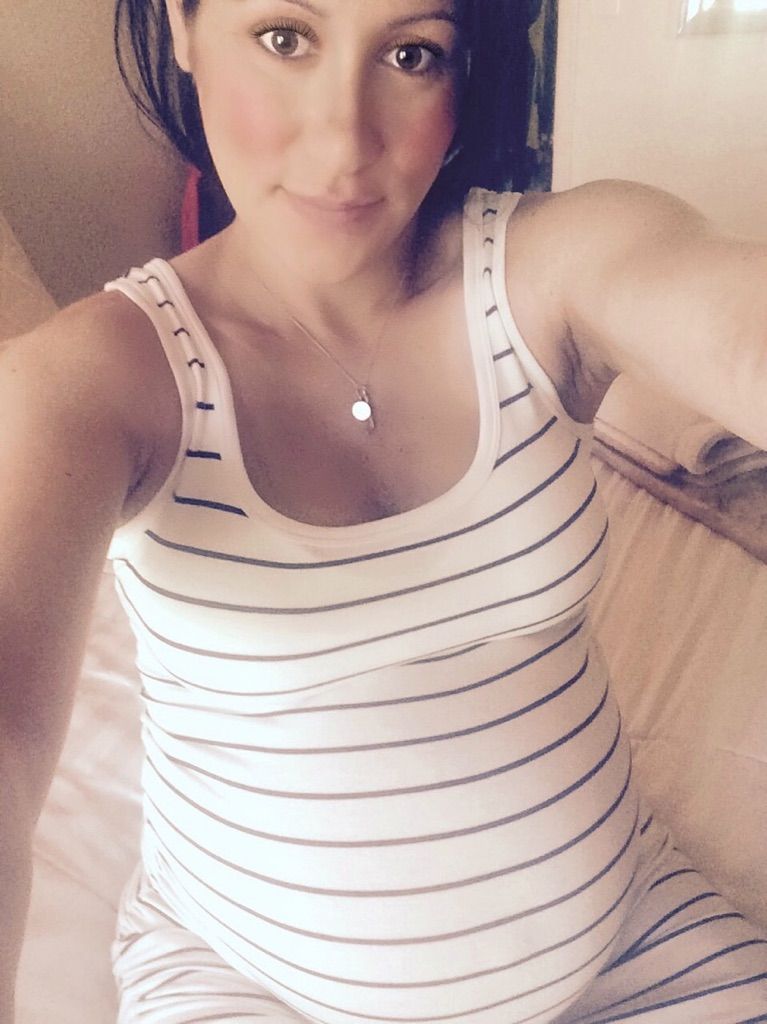 Still, Rachel’s situation was the same.  Rachel was excited to start nursing school.  She didn’t have an income. Her living arrangements and relationship were unstable.  Rachel knew she had the potential and the path ahead to still achieve all her goals and in the timeline she had hoped.  With all of this in mind, Rachel started to consider an adoption plan for her baby.

This is how I met Rachel.  At one of her visits to A Baby’s Breath, Rachel mentioned that she was thinking about adoption.  The counselor there gave her our family’s profile.  She looked at it and commented how happy we looked.  She called me that night.

That conversation was so smooth.  It was like I was talking to an old friend.  She asked if Matt and I could meet with her to discuss adoption further.  Without hesitation, I said, “of course!”

Soon after that phone call, Rachel, Matt and I met at a coffee shop.  We shared a little bit about ourselves and discussed adoption.  Rachel said she was seriously considering it, but didn’t want to say it was definitely her plan.  During that meeting, my mother and father drove by the coffee shop we were meeting in, and saw a rainbow over it.  Somewhere else, a good friend looked outside and saw a rainbow.  She took a picture of it and said she immediately thought of me. 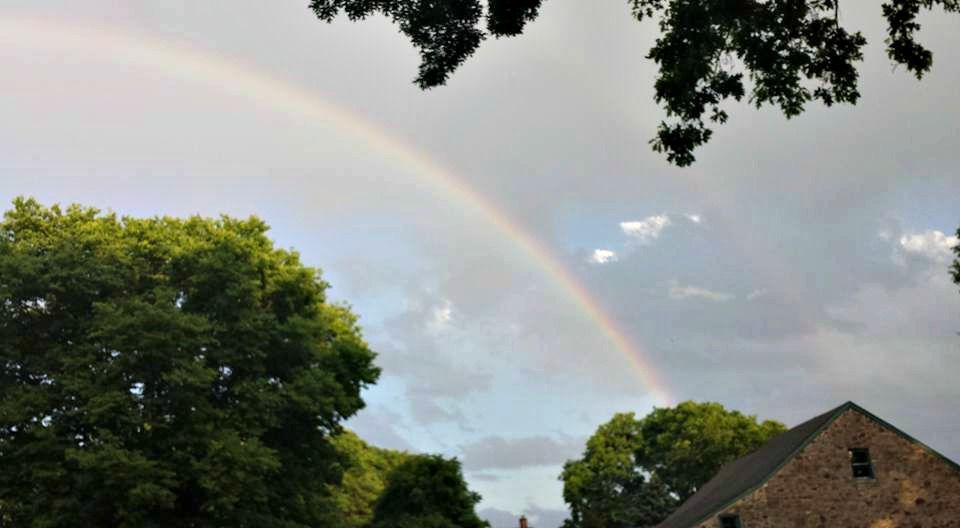 I thought the rainbow was a sign.  Matt and I tried not to get excited.  But, that is easier said than done.

Rachel and I texted back and forth a few more times.  Then, some time went by and I had not heard from her.

Then, you move on.

I’m so happy to say that has happened.  I got to meet the beautiful baby girl.  I got to hold her! I get to cheer Rachel on because she is an awesome mother. 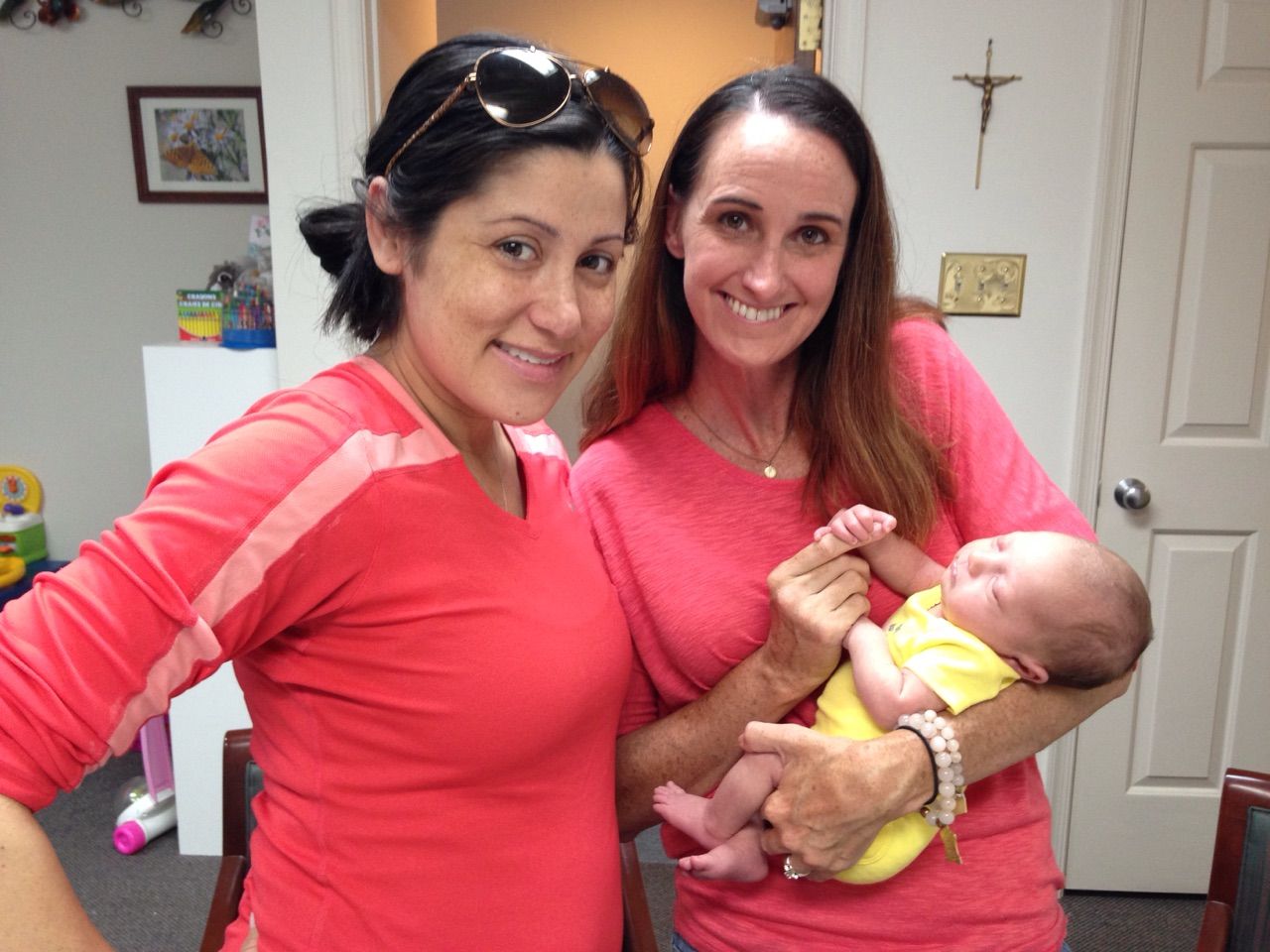 When I asked Rachel to share her story, she responded with an enthusiastic yes.  I asked if she would write a letter to who ever is considering abortion now.  She agreed, and asked if she could dictate while I wrote.  I did; and here it is.

A letter from Rachel to anyone considering abortion:

Please thoroughly read this letter and explore all options within your heart before making a decision that will shape your life forever.  There are positive and negatives to all the choices we make, however, the immense amount of joy and love that your own child will bring to you is second to none.  If you are not in the position to have a child right now you can always consider adoption.  At the very least you are adding another heart to a growing family.

I remember throughout my entire pregnancy being scared, terrified and very numb.  But, if you look within your heart the answer should come to you.

If you ever feel as though you need guidance there is always someone who will listen and help you along the way.*  From my own personal experience now having a daughter that is six weeks old has given me the companionship that I never had with my own mother.  Her dependency on me has made me a stronger person.  Bringing another life into this world is never a bad thing regardless of your circumstances.  People will rally around you and coach you every step of the way so you will never feel alone.  Even without a large family circle there are people that will support you and lift you up as if you were a part of their family.

*In this paragraph, Rachel is talking about how A Baby’s Breath and the counselors there helped her, rallied around her, coached her and helped her never feel alone.

If you are considering abortion, please read Rachel’s letter knowing she has been in a similar situation.

If you are someone who actively works in the pro-life movement – know that your work matters and that you are doing more good than you realize.  I know Rachel really appreciates the help that she continues to receive.  Let her voice assure you, you are appreciated!

I would like to thank Rachel for truly being an open book!  These pictures are Rachel – she texted them to me!  She agreed to answer all my questions and dictate the above letter.  I am truly thankful to her for allowing her name, her picture and her story to be published in the hopes that someone who feels the way she felt will know – there is help, there is support and making that phone call to A Baby’s Breath is worth it.